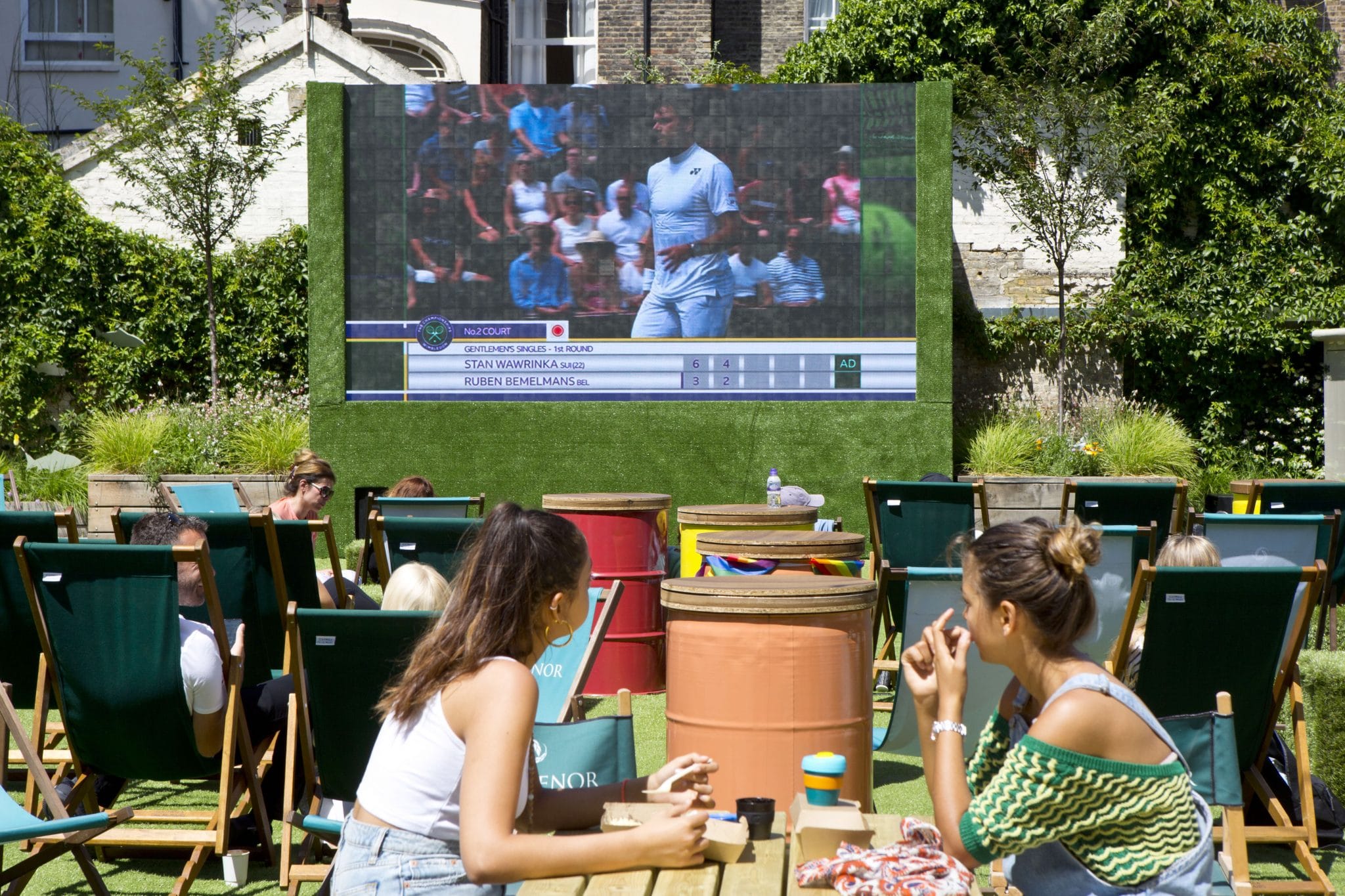 Oh, Wimbledon. It’s just impossible not to get caught up in the fever and excitement surrounding you. How intoxicating the strawberries and cream and glasses of Pimms become. How enticing a glass of fizz sounds as we debate whether or not we can also pull off all-white outfits. With this year’s championship running from June 27 – July 10, we’re well and truly in the midst of it all by now!

If you haven’t got tickets to watch live, do not fret. There are plenty of spaces ready to give you that classic Wimbledon experience from their big screens this summer. Deckchairs in the sun, with a glass of something cool as the forehands are hit at a frightening pace… Doesn’t sound too shabby as summers go. Here’s some great London spots that will ensure you catch all the action.

To enjoy the finest lawn tennis competition in the world, why not take to an outdoor patch of grass? Well, of sorts. Morena is partnering up with Sassy Cider for the ultimate Wimbledon experience in the Morena courtyard. They’ll be pouring Sassy’s Organic Draught Cider, and mixing up a selection of special Sassy cocktails. Rumour has it the drinks they serve up score aces every time.

An alfresco terrace is on offer at Bluebird to soak in some rays while you catch the action from minute one on the big screen. There’s Wimbledon-themed drinks and desserts that will drop shot you into simple bliss. And the rosé will be pouring all week fortnight long.

A quintessentially central London screening, with a riverside spot overlooking Tower Bridge as you watch the action on the big screen. It’s another pop-up event, with matches shown on the big screen between June 30 – July 2. Tickets are now sadly sold out for the VIP Viewing Experience, so fingers crossed you were able to nab one! (Or that they come back again soon).

4. Wimbledon In The Gardens, Mayfair

A gigantic outdoor area with options for drinks at two different spots sounds like the exact kind of summer we need. The deckchairs are out in full swing here at this veritable London oasis. That, my friends, hits as good as the competition’s first ace. Definitely be sure to sample the special Wimbledon Aperitivo cocktail menu.

The Happenstance resides in a handy central London location, just off St. Pauls, and offers a truly ideal (for a British summer, anyway) all-weather outdoor screen for you to catch the back-and-fourth action on. Cheering on Murray with a glass of Pimm’s? Could you get more Wimbledon if you even tried?

With one of the largest outdoor screens in the capital, The Refinery Bankside is not a spot to be sniffed at. You’ll get a deckchair on the alfresco terrace and a bar to get your tipple of choice – there’s not much more you could need. 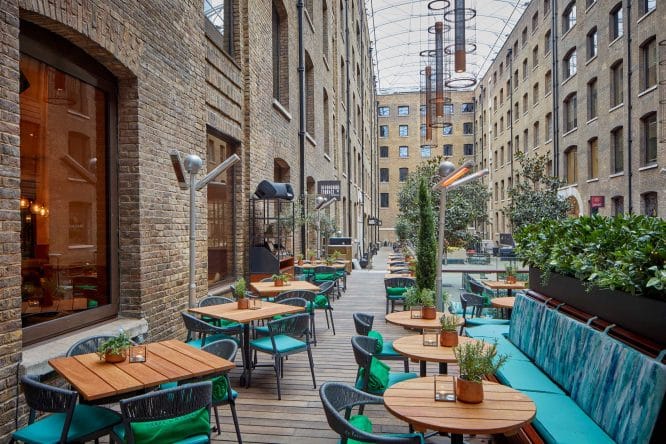 The Devonshire terrace is just made for lovers of tennis to kick back and relax with an ice cold drink and catch all the games, all the sets, all the matches from their favourite players. Whatever the weather, this will prove to be an excellent choice as it also provides shelter from those classic showers we’re used to every damn year while Wimbledon is on.

It’s all about Wimbledon everywhere you turn at The Cadogan Arms‘ Rose Room, where four screens will be broadcasting every rally. For spectators they’re turning out a special selection of Summer Sipsmith cocktails, that go wonderfully with their Strawberries & Cream Sherry Trifle.

In answer to The Cadogan Arms’ trifle, The George is turning out their own sweet Wimbledon special. Their English Classic Strawberry Knickerbocker Glory promises to be as much of a delightful mouthful to eat as it is to say. Pair it with a Rosewater fizz as you keep an eye on the centre court action, and you’re in for a ball of a time.

As part of the Vinegar Yard Summer of Screening, there’s all kinds of events making their way to the dedicated screening area. They showed all the Glastonbury action, and now they’re smack in the middle of their Wimbledon coverage too. Grab a special drink from event partner Bacardi, or a slice to chow down on from Bad Boy Pizza Society. They’ll also be showing all the Love Island drama, so you’re in for a full day and evening of on-court serves and poolside swerves.

At Camden Market Hawley Wharf it’s not enough for them to just show the Wimbledon stream. Nah. They’re going all in with a weekend of Sports Days from July 9-10. As well as a big screen keeping you posted with each backhand, there’ll be family yoga, a tug-of-war, as pass the water bomb competition, and more. Find out more details at the website.

You might think Screen on the Canal is just for checking out moves from the green canal-side steps, or for belting your heart out at the Encanto sing-along. But they’ll also be showing plenty of the Wimbledon action. Head down for a day of varied viewing entertainment.